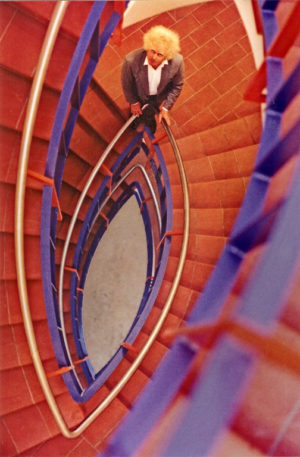 My story starts in Groningen, Netherlands.

Seven years after WW2 ended the air remained thick with despair and there were still piles of rubble on the ground in Groningen, where once had been handsome buildings around the city square.

A bold decision for a new beginning in Australia was made by my parents.

Perhaps this vivid lingering image of urban destruction promoted an early taste for the process of building and architecture, to become firmly lodged, leading to some interesting adventures. At first my education was unusually haphazard but soon there followed a more regular template through an  established trajectory via university.

Then later, working in a variety of architectural offices, real life made an appearance.

Significantly… I worked in the Sydney office of Col Madigan (EMTB) and while there, with Chris Kringas, I became co-designer of the High Court of Australia, in Canberra.

We won the Australia-wide architectural competition and in the early/mid-1970s, I was the supervising architect for the construction.

In May 2021, The High Court of Australia held a function in the building, to celebrate 40 + (1) years since construction completion.

Chief Justice Susan Kiefel invited Feiko to make a speech to record the history of its genesis/creation, from the architectural competition to the start of on-site construction.

The speech can be seen via this link. Click here.

This experience revealed and unfolded the mystery and dense excitement to be found in the flexing of design muscle, and opportunities to extend further into the  architecture arena. Especially that of public buildings, which has remained my primary focus throughout.

Not too long after I established my own office, there was another big architectural competition:

The Australian Stockman’s Hall of Fame and Outback Heritage Centre, which I won.

The building was opened by the Queen in Longreach Queensland,1988.

This became the centrepiece of my practice.

Many innovative projects followed, very many in the North Sydney area. Other competitions were also successful for Libraries and Civic Centres. Examples can be viewed on this web-site.

More recently; some books have been published, which tell the story of my architecture, unorthodox adventures as a migrant child and re-visiting the old country as an adult, to check out what my contemporaries  have been up to in-the-meantime, after an absence of more than 50 years.

And so: beauty and wonder…the search continues.